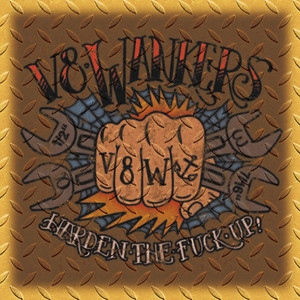 V8 WANKERS - The story so far: 2000 | Founding of the band in Offenbach / Germany 2001 | First live shows with Skew Siskin and Rose Tattoo. 2002 | Release of the debut album „Blown Action Rock“, extensive touring including a show on the main stage of „Bizarre Festival“ together with Turbonegro and a show in Croatia where the band shared stages with Motörhead. 2003 | Release of the second album „Automotive Rampage“ and shows with Rose Tattoo as well as an appearance at Germanys famous Wacken Open Air. 2004 | Re-release of “Blown Action Rock” including bonus tracks and shows with Gluecifer, D.R.I., The Bones, The Meteors and many others to follow. 2005 | Release of the 3rd album „The Demon Tweak“ produced by Uwe Lulis and touring Europe with Rose Tattoo as well as playing countless club shows. 2006 | The band plays more than 120 live shows across Europe. 2007 | Release of the fourth album „Hell On Wheels“ and a tour with W.A.S.P. are on their schedule. 2008 | Again countless shows including support on Girlschools 30th Anniversary tour. 2009 | With Full Force Festival and touring with Peter & The Testube Babies. 2010 | Release of „Foxtail Testimonial“ again produced by Uwe Lulis and the bands 10th anniversary was celebrated by several live shows. 2011 | The band signs a worldwide deal with SPV and their 6th album „Iron Crossroads“, produced by Tommy Newton, is released. 2012 | After various line-up changes the band focused on producing their new album and signed a deal with the well known German agency Wizard Promotions. 2013 | The band’s 7th album „Got Beer?“ was released on SPV at April 26th and supported by a tour in May as well as lots of new experiences happened until than. 2014 | Shows, shows and even more shows as well as preparing a new album. 2015 | This will be the bands 15th anniversary and album #8 will be released, called “Harden The Fuck Up”, and followed by an extensive European tour and, first time, shows outside of Europe as well. There sure is more great news coming up soon, but that’s another story… 2018 | May, 18th: Release of "Full Pull, Baby!"