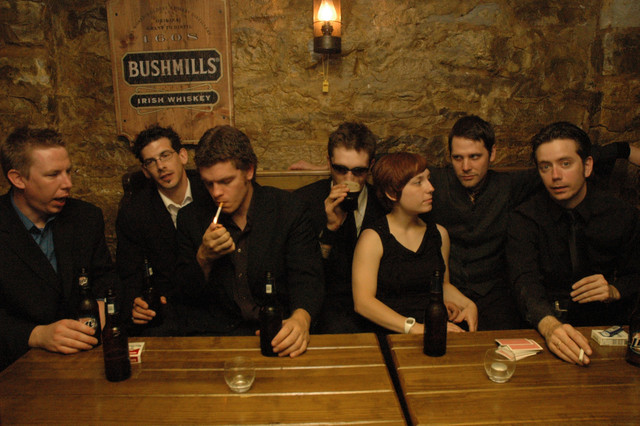 Coming from the predominantly Irish neighborhoods of Southside Chicago, the Tossers have been expanding the boundaries of contemporary Irish music since the early '90s. The band chose their name for its derogatory meaning, “throw away.” The term dates to Shakespeare, and depending who you ask it also means commode, drunk, to agitate, disturb, or disquiet. Although their name may be irreverent, their music is not. The heart of their distinct sound is derived through the melding of traditional Irish and Punk Rock roots. Combining the folk instrumentation of mandolin, fiddle, tin whistle, and button accordion with amphetamine fueled guitar, bass and drums, the Tossers play with a furious edge that teeters between rage and raucousness. Possessing the ability to masterfully employ stark tempo changes, from the brink of the insane to the solemn Irish ballad, the Tossers do not disappoint. Their live shows come with a little bit of blood and sweat, and a whole lot of whiskey and beer. Their albums are dedicated to nuanced musicianship and emotional introspection. The recent completion of the band's 7th full length album, The Emerald City (Victory Records, 2013), has raised the bar. According to T. Duggins, “There was a lot more preparation and care taken with the recording; and it's more about us, it's far more personal to me than anything before.” It was recorded at Million Yen Studios in Chicago by producer Andy Gerber, mixed by Ken Sluiter in studio, and mastered by Collin Jordan at The Boiler Room. Discography The Emerald City (Victory Records, 2013) On a Fine Spring Evening (Victory Records, 2008) Gloatin’ & Showboatin’: Live on St. Patrick’s Day CD/DVD (Victory Records, 2008) Agony (Victory Records, 2007) The Valley of the Shadow of Death (Victory Records, 2005) Purgatory (Thick Records, 2003) Communication & Conviction: The Last 7 Years (Thick Records, 2001) The First League Out From Land EP (Thick Records, 2001) The Tossers/Citizen Fish split single (Thick Records, 2001) Long Dim Road (Thick Records, 2000) The Tossers/The Arrivals split single (Smilin Bob Records, 1998) We’ll Never Be Sober Again (Folk You Records, 1996) The Pint of No Return (1994)