Details zu Kitty In A Casket 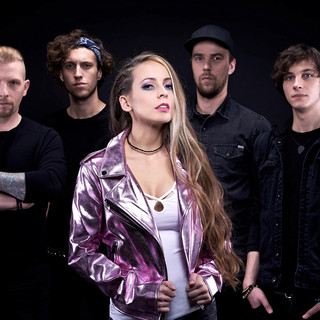 Kitty in a Casket is a female-fronted punk rock band from Vienna formed in 2008. The band consists of vocalist Kitty Casket, guitarists Billy the Bat and Todd Flash, bassist Marc Maniac and drummer Max van Angst. Their sound can be described as a combination of the typical ’in your face’ punk rock sound, rock’n’roll riffs and spooky but fun lyrics. The band released their first full-length studio album 'Horror Express' in 2009, followed by their four track sold-out EP 'HalloWien' soon after. In 2011 they released their 2nd album 'Back to Thrill'. The band's third studio album 'Bittersweet' was released on Better Than Hell Records in the spring of 2013 in both Europe and the USA, proving an international success. The latest 4th studio album was released worldwide in cooperation with renowned German record label Rodeostar/SPV. The tagline 'Punk Rock, Lady Style' is probably the best way of describing the sound, energy and soul of the new record. Kitty in a Casket have been touring around Europe in support of their albums playing club shows and major festivals such as the 'WGT - Wave Gotik Treffen' and 'Back to Future' in Germany, ‘Whitby Goth Weekend’ in the UK, 'Nova Rock' in Austria, 'Psychobilly Meeting' in Spain, 'Fiesta du Rock' and 'Sjock' in Belgium, 'Warhead Fest' in Poland, 'Club Sin' in Finland and 'Pod Parou' in the Czech Republic, to name a few. They have also shared the stage with The Exploited, The Other, Betontod, Die Kassierer, Dead Kennedys, The Bones, Guana Batz, Mad Sin, and many more. The band also embarked on a 5-week US Tour in the summer of 2013 promoting 'Bittersweet' overseas by playing 27 concerts across the States and returned a second time for a ‘Kiss & Hell' West Coast Tour in September 2016, followed by a UK Tour one month later. BOOKING: DE/AT/CH ------------- Rodeostar Thorsten Harm thorsten@rodeostar.de Tel.: +49-40-41005550 USA ------------- TBD booking Tony facebook.com/tbdbooking tonydratstar.tb@gmail.com Tel.: 303-475-5948