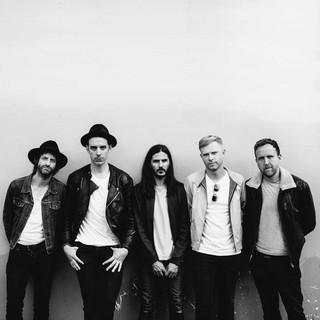 2002 The Movement was formed in Copenhagen by Lukas Sherfey. They played Denmark and started touring Germany. 2003 The Movement released the vinyl EP "Hardmod Internationalist EP" on Weird System and their 1st full length album "MOVE!" on the German record label Destiny Records. They did a 3-weeks tour with the German band "Terrorgruppe" through Germany, Austria and Switzerland. The Movement also played a lot of single club shows in Germany. 2004 The Movement played the Italy Street Beat Tour w. Banda Bassotti (it) and Fermin Muguruza (ESP) They also did the Deconstruction Tour 2004 through Europe w. Pennywise(US), Beatsteaks(D), Anti-Flag(US) and The Slackers(US). They played headliner shows in Germany, Spain, Switzerland & The Netherlands and festivals including Roskilde Festival in Denmark. They did a christmas tour w. Terrorgruppe and Muff Potter through Germany, Austria and Switzerland. 2005 The Movement released their 2nd full length album "Revolutionary Sympathies" on Destiny Records. They played a headliner tour through Germany and a lot of festivals incl. Rheinkultur in Germany. They did a tour with The Slackers(US) in Germany, Sweden, Denmark, Belgium and Austria and a "Revolutionary Sympathies" tour in Italy and Spain, Germany and France. 2006 The "MOVE!" album and "Revolutionary Sympathies" was released in Japan, and The Movement played a successfull tour in the country. They also did a Europe tour with Mad Caddies(US) and a 4-weeks headliner tour through Europe. 2007 In The Netherlands, The Movement played their last show before taking a break. The frontman, singer & guitarist Lukas Sherfey, started to play acoustic solo shows around Germany. He did a support tour in Germany w. La Vela Puerca(URU) and a small tour with backing band in Spain. 2008 Lukas Sherfey released his solo album "Soul Vacation" and added a horn section to his baThe Movement - Class War!nd, to get a nice soul feeling. The album got good reviews in the German music press (Rolling Stone Magazine, Ox, Uncle Sallys etc..) 2009 Lukas Sherfey played club shows and festivals in Germany and did a Spain tour in the fall. 2010 The Movement starts up again with a few changes in the line up: Lukas Sherfey: Guitar and vocal Stefan Andersen: Drums (Stefan played on the "Revolutionary Sympathies" album and also on a lot of Movement tours) Chandu Chodavarapu: Bass (Chandu played bass live with Lukas Sherfey) The Movement starts touring again in the fall/winther 2010 2011 The Movement releases the EP "Still Living The Dream EP" in april 2011. Summer Festivals and big Europe fall tour- Spain and Germany, Austria Switzerland, France, Slovenia, Italy, Etc.. and with a new Drummer, Kasper Rasmussen! A fun fact: Kasper Rasmussen and Lukas Sherfey are close family related, they are cousins! 2012 The Movement is now releasing their third full length album titled “Fools Like You”. Lot’s of Festivals and a big “Record Release Tour” around Europe! 2013 New bass player, Sebastian Page! Lot's of shows, even in the USSR! 2014 New EP out "OUTRAGE!" 4 powerful songs. Released by Mad Butcher rec. The old records MOVE and Revolutionary Sympathies has been reprinted on vinyl. Lot's of dates and a big Europe tour with shows in Spain, Italy and France, a few in Switzerland and Belgium and a lot in Germany!