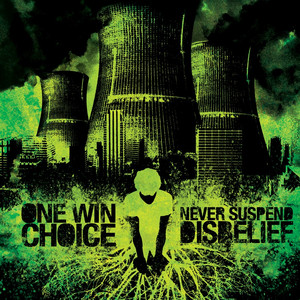 LAST SHOWS l ALL SHOWS WITH ASTPAI: www.astpai.org October 16th Philadelphia PA @The Golden Tea House w/The Holy Mess October 17th Providence RI @ AS220 October 19th Toms River NJ @ The Shed October 20th New York NY @ The HiFi Bar w/ Fellow Project October 21st VA Richmond VA @ The Camel w/ Luther, Static Radio, The Arteries October 22nd NC TBA October 23rd Atlanta GA @ Wonder Root w/ Burners October 24th FL TBA October 25th FL TBA October 26th FEST When a band like One Win Choice comes along, I’m reminded of what I loved about hardcore and punk in the first place: the community and friendship, the questioning nature and righteous indignation of their subject matter, and most importantly, songs that are passionate, honest, fiery and tight as all hell. I don’t need to be bowled over by your band’s “new sound” – Refused already did that ten years ago. Just make me believe in what you’re saying while I stomp along to the beat and scream in unison with the chorus and I’m a happy boy. I’m not claiming that One Win Choice is going to save the scene. However, I won’t deny that they’re doing all they can to breathe some much-needed life into it. With the release of a successful debut full-length last year and several DIY tours under their collective belts, it’s safe to say that this Toms River, N.J. five piece is off to a great start. 2009 finds the band stronger and more determined than ever with the release of Define / Redefine, five songs of hot-blooded, combustible hardcore punk with a poignant missive that questions authority, calls for solidarity and seeks truth. The South Jersey quartet sounds more assured of their songwriting skills than ever, more provocative and more memorable. While the band’s debut full-length, Never Suspend Disbelief was always on the verge of something great, Define / Redefine makes good on the promise of that record and finds One Win Choice hitting the punk rock nail squarely on the head. -Beartrap PR