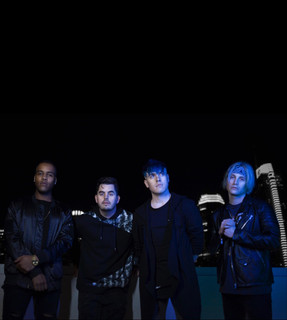 Over the past four years, OFF! have proven to be more than just a band. They also raise a series of challenging questions. After four decades of heavy use, does punk rock still have any life left in it? Do Keith Morris and his gang of grown-ass punk heroes still have the goods? They’ve answered their own questions with a resounding yes through a packed itinerary of shows and a handful of recordings that are among the rawest musical experiences of the new decade. Combining reckless improvisational energy with the combined skills of four deadly sharp musicians, OFF! have dug down through a decades’ worth of accumulated stylistic garbage, and rediscovered the stripped down core of noise, speed, and rock & roll that punk seemed to have lost forever. Their third full-length studio recording, Wasted Years, is the most direct and in-your-face embodiment of OFF!’s mission yet. Recorded in their practice space, live to 8-track 1/2" tape--with the barest minimum of rehearsal beforehand and enough mic bleed to make punching in over rough spots afterward an impossibility--the album captures the group (Morris, guitarist Dimitri Coats, bassist Steven McDonald, and drummer Mario Rubalcaba) in the spontaneous act of bringing its 16 songs to frenzied life. Listening to it is like jumping into the middle of one of the most chaotic and electrifying creative musical environments on Earth, where Cuban rhythms and Sabbath riffs collide with the energy of a California circle pit. Searingly loud, frantically paced, and best taken in a single 23-minute dose, Wasted Years is a sonic cinder block, a clenched fist raised in the face of rock & roll refinement. If you had any questions about the state of punk in 2014, this is your answer.