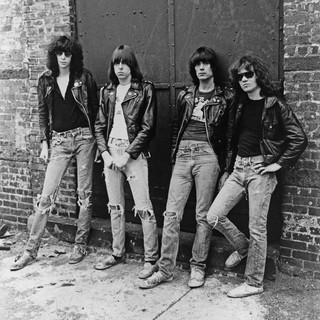 The Ramones were loud and fast - Everyone knows that, even the poor, blind saps who never loved the band. But the Ramones were many things, and gloriously so, from the moment of their inception in Forest Hills, New York, in 1974, until their final concert, 2,263, in Los Angeles on August 6, 1996. They were prolific - releasing 21 studio and live albums between 1976 and 1996 - and professional, typically cutting all of the basic tracks for one of those studio LPs in a matter of days. They were stubborn, a marvel of bulldog determination and cast-iron pride in a business greased by negotiation and compromise. And they were fun, rock n' roll's most reliable Great Night Out for nearly a quarter of a century. Which seems like a weird thing to say about a bunch of guys for whom a show, in 1974 or '75, could be six songs in a quarter of an hour. The Ramones were also first: the first band of the mid-'70's New York punk rock uprising to get a major-label contract and put an album out; the first to rock the nation on the road and teach the British how noise annoys; the first new American group of the decade to kick the smug, yellow-bellied shit out of a '60s superstar aristocracy running on cocaine-and-caviar autopilot. Above all, the Ramones were pop: stone believers in the Top 40 7-inch-vinyl songwriting aesthetic; a nonstop hit-singles machine with everything going for it - hammer-and-sizzle guitars and hallelujah choruses played at runaway-Beatles-velocity - exceptactual hits. According to an August 1975 article in England's Melody Maker about the crude, new music crashing through the doors of a former country-and-bluegrass bar in lower Manhattan named CBGB, the local press was already hailing the Ramones as - get this - "potentially the greatest singles band since the Velvet Underground." A peculiar compliment since the Velvets' own few 45s were all crushing radio bombs. But there was one thing you could never, ever say about the Ramones: that they were dumb. In their time, in their brilliantly specialized way, the Ramones - the founding four of Johnny (guitar), Joey (voice), Tommy (drums), and Dee Dee (bass) were the sharpest band on the planet. Fully evolved as musicians and songwriters. Confident in their power and the importance of what they had. The atomic-mono impact of Johnny's Mosrite guitar; Joey's commanding, sour-Queens vocal delivery; the unity of wardrobe and identity; right down to the original, collective songwriting credits and the mutually assumed surname - they were the result of a very simple philosophy. As Tommy puts it: "Eliminate the unnecessary and focus on the substance." That is precisely what the group did on every record it ever made, on every stage it ever played. The Ramones' place in rock 'n' roll history was already assured by 1978 with their first three albums: Ramones, Leave Home, and Rocket To Russia, all made in the span of 18 months, between February 1976 and the fall of '77. When it was time to make records, Tommy says, "Our art was complete." The art was the combined product of four strangely aligned personalities - all living within shouting distance of each other in the conservative, middle class enclave of Forest Hills, where their mutual needs as fledgling musicians and bored delinquents far the mess of differences and civil wars that could never quite bust them apart. Once a Ramone, always a Ramone.