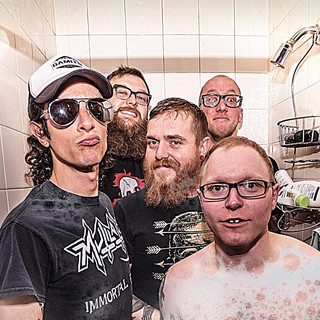 With roots in the Bay Area metal and Albuquerque punk scenes, Russian Girlfriends strikes a careful balance between raw youthful energy, infectious melodies, and thoughtful, story-driven lyricism. The band formed in 2014, comprised of Albuquerque local scene veterans and ex members of Koffin Kats, Adam Hooks and his Hang-ups, and Glitter Dick. The original lineup; Adam Hooks as lead vocalist, Ian Jarrell and Colin Dowell on guitar, and Jeremy Keith on bass, was completed when Sasha Horn (drummer for Heathen, Novembers Doom, and Forbidden.) joined as the band’s drummer. "Hooks is a songwriting and vocal force of nature. His weapons are his pen, paper, and a voice that can floor you completely and serenade you sweetly. Dowell and Jarrel's guitar lines Ride the Lightning and bite harder and faster than a pit of Ass Cobras. Horn is a prize fighter behind the drum kit. His precision and power drive each song, while Keith's bass playing gets your hips shaking and makes it all go down smooth like a fine scotch." - Gene Simmons The group is quickly winning fans near and far as they have embarked on seven tours across the United States, Canada, and Europe supporting scene veterans Red City Radio, The Bombpops, Teenage Bottlerocket, and PEARS along the way. They were also featured at "The Fest" in Gainesville, FL. In 2017, the band signed to German label Gunner Records, re-releasing their debut album "All Around," a rock-punk-pop record that draws on themes lifted from real life events, dreams, and relationships, all told with distinctly surreal and satirical undertones. The band is currently working on the release of their second LP. "All Around" is available for streaming and purchase on Bandcamp, Spotify, iTunes and Apple Music, and from Orange Whip Records (US) and Gunner Records (EUR).