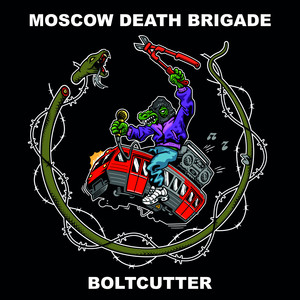 MOSCOW DEATH BRIGADE is a techno/rap/punk phenomenon from Russia that plays “Circle Pit Hip-Hop”: a unique and aggressive mix of electronic music, hardcore punk and rap, steeped in graffiti and street culture and flavored with a progressive social message against war, racism and any kinds of discrimination. Initially created as a DIY team back in 2008 MDB has its roots in Russian progressive social movements and graffiti underground scene. Since 2014 MDB has been one of the most welcomed independent touring acts in the European punk, hardcore and social activist scenes. The band has played more than a hundred shows and numerous festivals all over the EU, including Boomtown (UK), With Full Force (DE), Zikenstock (FR) and Resist to Exist (DE). The band’s two albums “Hoods Up” and “Boltcutter” both released by labels “Fire and Flames” (DE) and Rebel Sound (US) traded places in TOP 10 charts with the latest releases by bands such as Terror and Rancid. MDB openly voices their strong position against war and any kinds of discrimination, as well as takes part and organizes benefit events and spreading the word of unity in the name of Brother & Sisterhood. MDB shows usually attract the representatives of all kinds of subcultures: from punx, skinheads and metalheads to hip hop kids, graffiti writers and football hooligans, demonstrating that all of us are the parts of the same worldwide underground movement, based of friendship, mutual support and freedom.